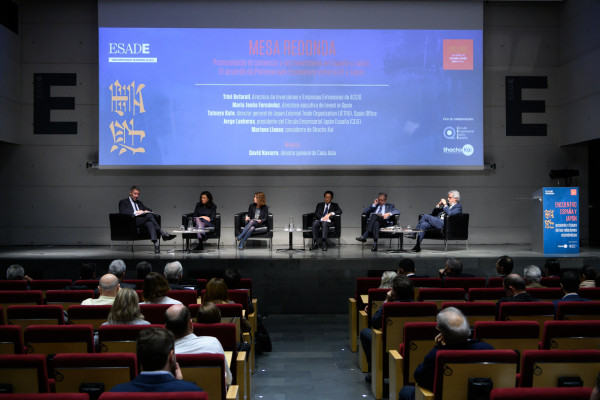 Posted on July 14, 2020By admin
Posted in Uncategorized

On Thursday 15 November, Jorge Lasheras, Chairman of the Japan-Spain Business Circle (CEJE), participated in the meeting “Spain and Japan: present and future of economic relations”, organised by ESADE and the Organising Committee in Spain of the 150th Anniversary of the Establishment of Diplomatic Relations between Japan and Spain.

The event focused on economic relations between Spain and Japan, as well as the signing of the EPA between the European Union and Japan, and the impact it may have on these relations. The institutional welcome was delivered by Francisco Longo, Deputy General Director of EADE; Makoto Hattori, Chairman of the Organising Committee of the 150th Anniversary of Spain-Japan; and Naohito Watanabe, Consul General of Japan in Barcelona. Likewise, Miguel Angel Navarro, Ambassador of Spain in Japan (2011-2014) and Ambassador of Spain in Singapore (2014-2018), also made a brief introduction.

The session featured two round tables in a talk-show format where issues like the promotion of trade and investment in Spain and Japan were discussed through the lens of the economic agreement signed between the EU and Japan, and the economic prospects of strategic sectors. In the first of these discussions, Jorge Lasheras contributed his professional perspective on the status of economic relations between both countries and the potential positive impact of the EPA agreement on these exchanges. Lasheras affirmed that this agreement “opens enormous possibilities for Spanish companies to access the Japanese market in the future; this is an opportunity that must be seized”. The round table also featured the participation of Trini Bofarull, Director of Investments and Foreign Companies at ACCIÓ; María Jesús Fernández, Executive Director of Invest in Spain; Tatsuya Kato, Managing Director of Japan External Trade Organization (JETRO), Spain Office; and Mariano Llanas, President of Shacho Kai.